Hope this end of year’s newsletter finds you well

What a year, 2018 – I’m sure I’m not alone in feeling slightly heavy hearted in even trying to pursue a sense of celebration of the arts in these upsetting political times.

But only one quiet moment is needed to remind you of how carefully crafted the art of warmongering is. As nifty as the finest clockwork, as balanced as the greatest composition painting vivid pictures in the minds of its audience.

Sharing a vision of how one can perceive the world is an artist’s job. The craftiness that has taken centre stage in many of our lives right now is very different to what I believe in. I work to inspire our souls to see, hear or even reclaim the wonders that surround us.

As the crow flies, let me show you around what I’ve been doing this year. 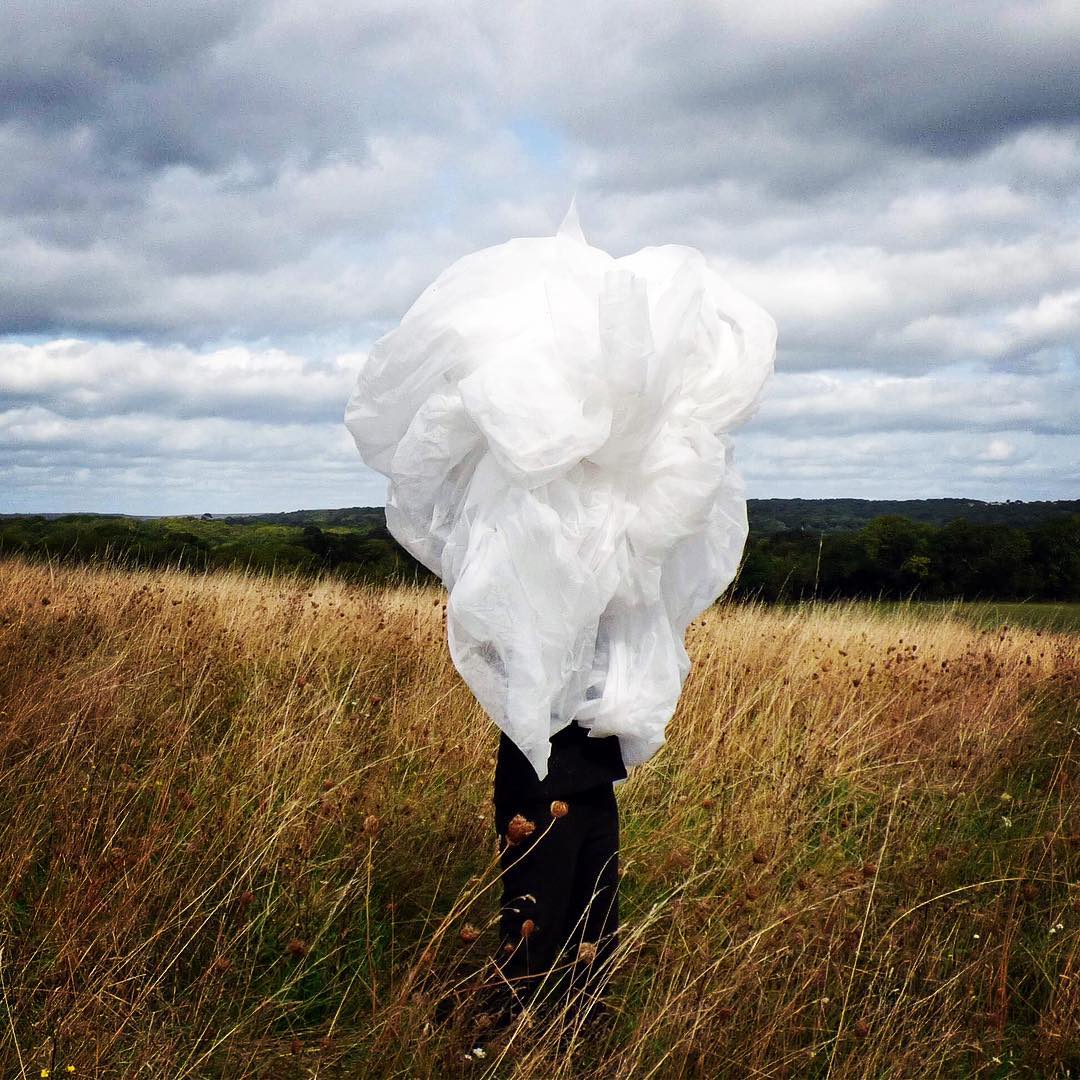 Plucking a cloud of 40 metres of fabric out of the sky, for the next panoramic score piece in September. Photo George Patterson.

My 2018 commissions have been the most cross-genre and cross-discipline I’ve done to date with a dazzling change of toolsets per project! A lot of clouds were involved – from cloud nine in February to my head in the clouds in May to physically picking a cloud from the sky in September (as illustrated in picture above).

I’ve selected a highlight per month – if you’re curious to read on please click on the provided links to my blog.

.
In February, I was very honoured to be awarded The Composers’ Fund from the British PRSF for Music Foundation. With this support I’ve been developing new pieces throughout the year, some of which have premiered this year, others are booked for 2019.
. 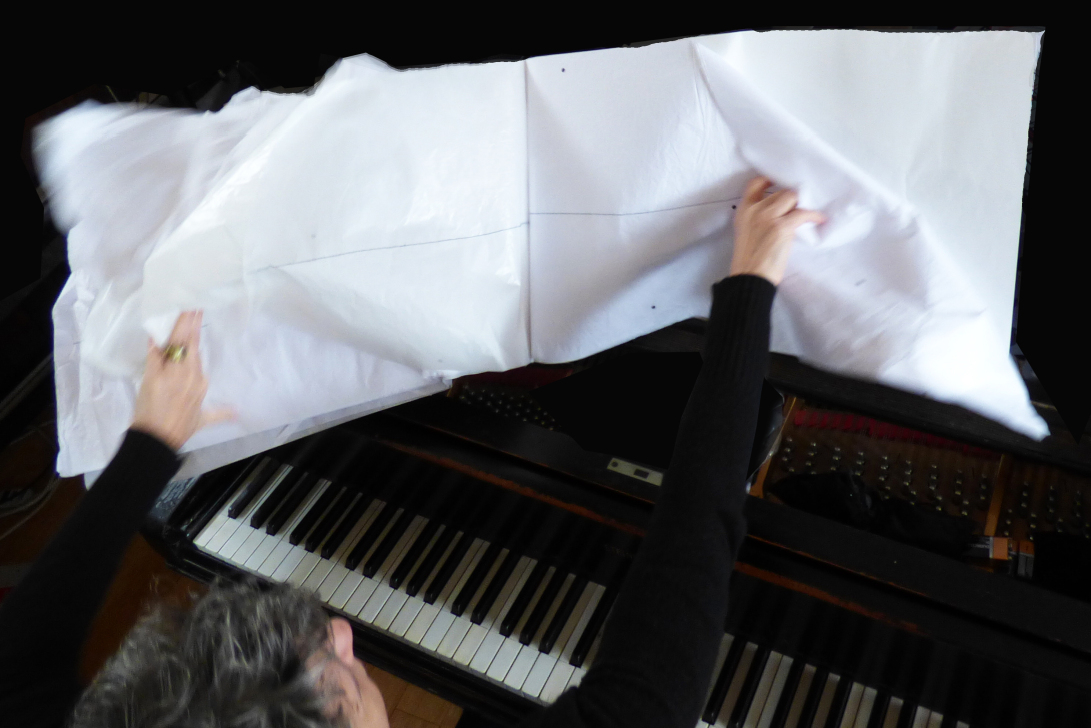 .
March was about listening to the beautiful rustling sounds as found in nature – in tree leaves, plant stems, various phases of water, solid or liquid, in sand and pebbles, soundscapes as a whole, of which many of these dynamic sound events are triggered by either wind or magnetism.

It’s part of my ongoing research into capturing and distilling the essence of these magnificent natural sound textures into minimalist works of sound and art, such as the rustling paper pages of sheet music being turned.

This concept is a delicate and exciting cross-over technique of musique concrète, graphic and conventional notation very dear to me, I affectionately nicknamed my page turners. 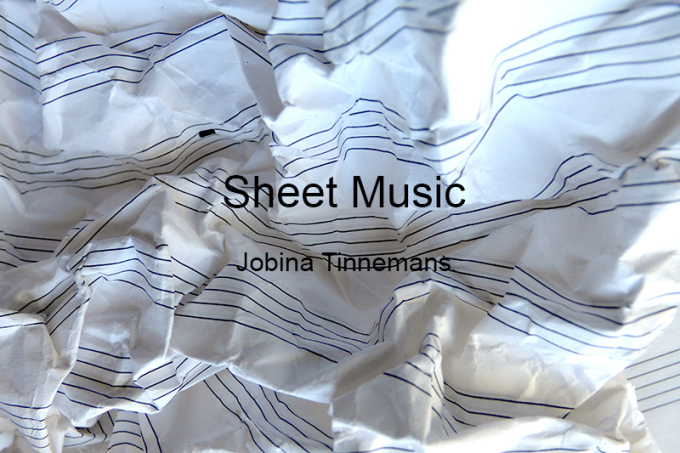 In April I embarked upon a choral commission for the opening of Llwyn Celyn in the Black Mountains in Wales, running till October. It was an artist’s collaboration which brought us to medieval times, involving along the way bats, trees, canons, poetry, a nearly extinct Welsh dialect and a building site.
The resulting work Enduring Like A Tree Under The Curious Stars consists of two movements. The first ‘Four Seasons, Countless Years’ for SATB choir, is in a traditional medieval canon style, while the second, ‘In The Wings Through The Night’, draws from calls of a local resident, the Lesser Horseshoe bat, in a more contemporary canon style.
. 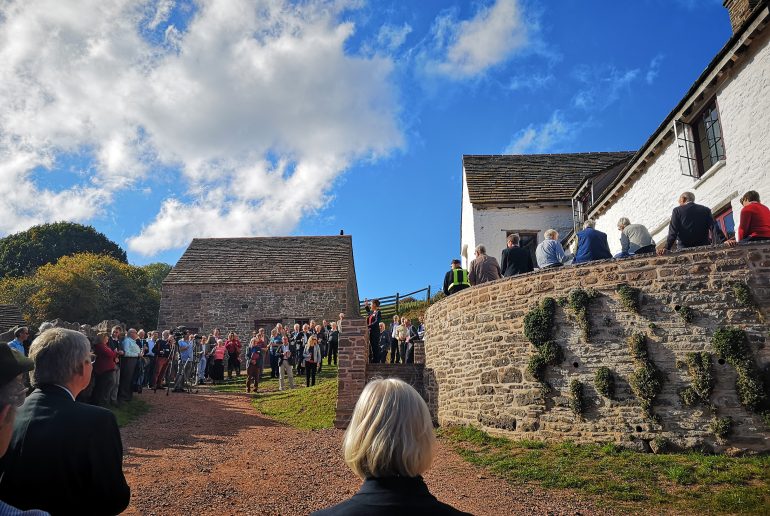 The distributed sound performance these choral works were featured in was set in a wide natural arena. I recorded the entire soundscape panorama, the echoes caused by the mountains in the far distance and subtle close mic textures generated by concrete instruments, with my custom-built 360º field recording kit and these immersive recordings are a dream to work with in the studio.
. 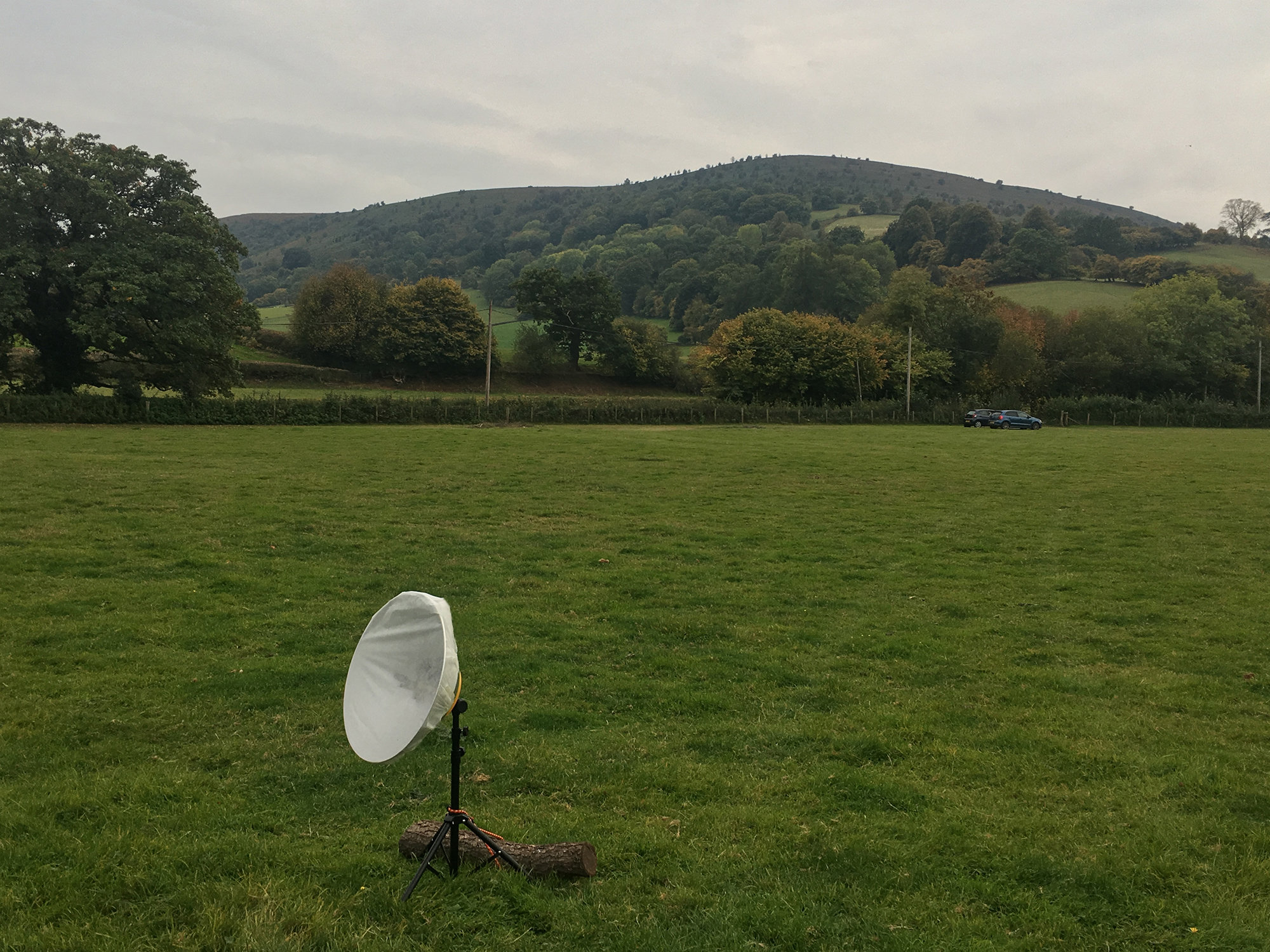 One of the four mic set ups of my 360º field recording kit picking up the rich open natural sound stage at the roosting hour of day, dusk. 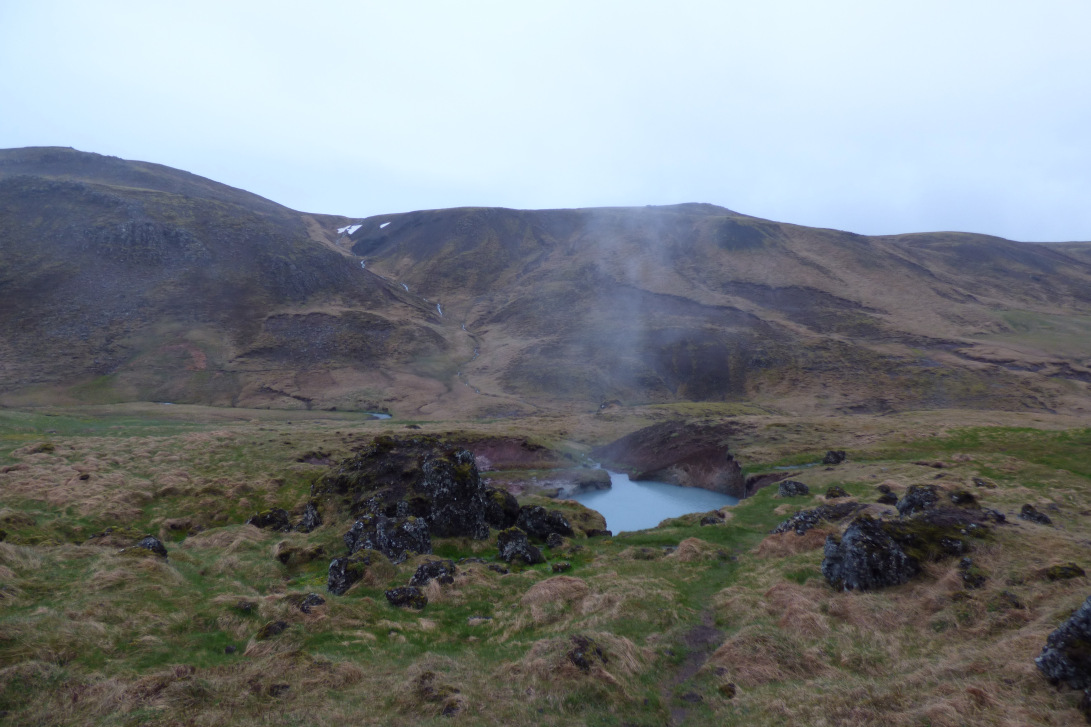 From the steep altitudes of the ‘Fell’, the mountains, ’Sylt’ dives into a delicate vast plane of finely tuned sediments that tickle the senses.

.
Most of May was spent with my head in the clouds and with my body in the silty sea. Written in mixed graphic and conventional notation ‘Fell’ and ‘Sylt’ for strings and harpsichord were premiered by the Nordic Affect ensemble in Reykjavík in May. This is part of things to come in 2019! listen to a preview of the live recording here 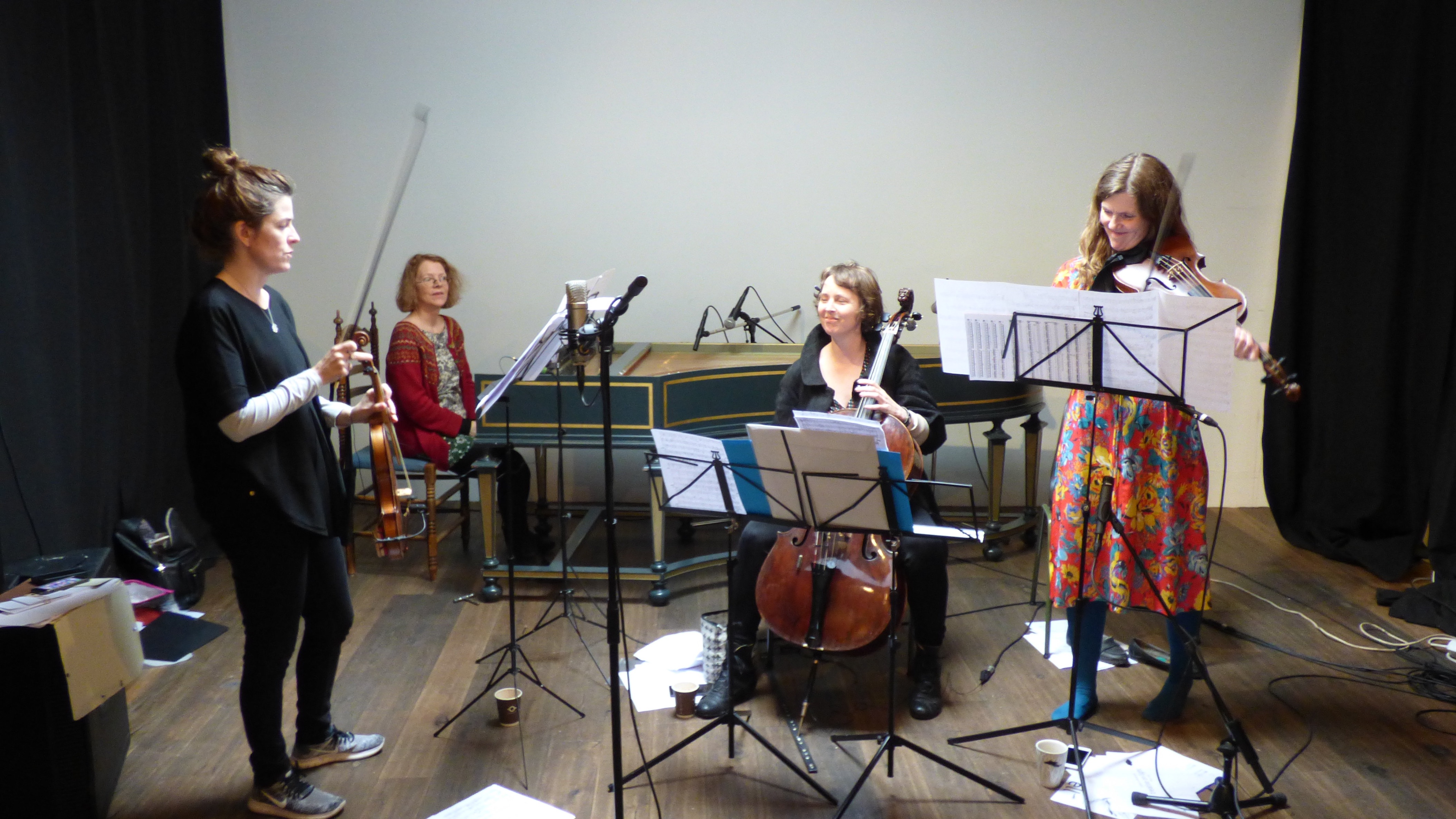 For a solo performance in June I was excited going back to my roots of experimentation in electronics and live performance.

My ideas of natural soundscapes and wildlife, or not-so-wild life, calls were incorporated into virtual instruments that I’ve been designing and programming from my personal library of (delicious!) field recordings I collected over the years.

To control the virtual instruments I built custom-made electronics interfaces out of cream jars – a playful gender statement to modify beauty department items into audio inter….faces (see what I did there?). 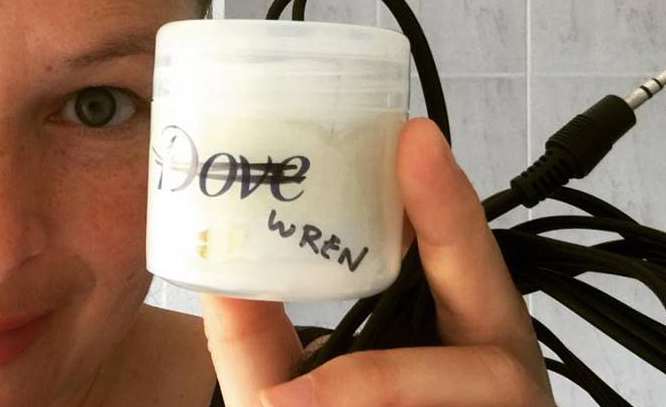 I managed to squeeze the essence of the magnificent song of a wren into a cream jar….

The glorious heatwave of July was spent mostly indoors rehearsing for the UK premieres of ‘Fell’ and ‘Sylt’, together with an ensemble that we christened ‘an Excellence of Ladies’ – the collective noun for a group of female musicians (as if you didn’t know).

We had the honour of performing in the stunning Art Deco surrounds of the DeLaWarr Beach Pavilion. As usual BBC R3 did a marvellous job of capturing delicate details such as whispering strings and breathing textures.

In August I returned to an on-location mixed choral and field recordings work for Kammerkor Sudurlands, titled ‘Mighty Mother’. The genesis of this composition was while working with the choir in 2016. Premiere is planned for next year. 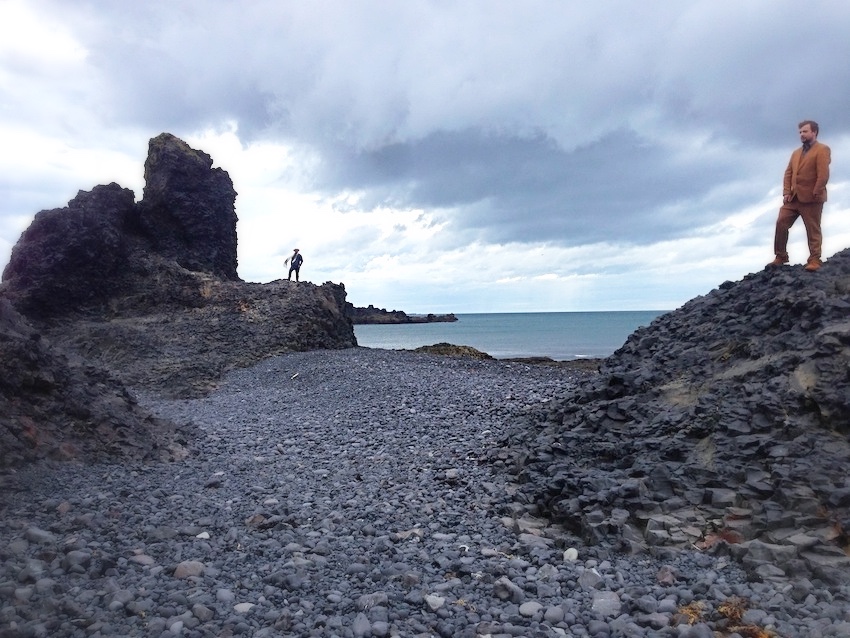 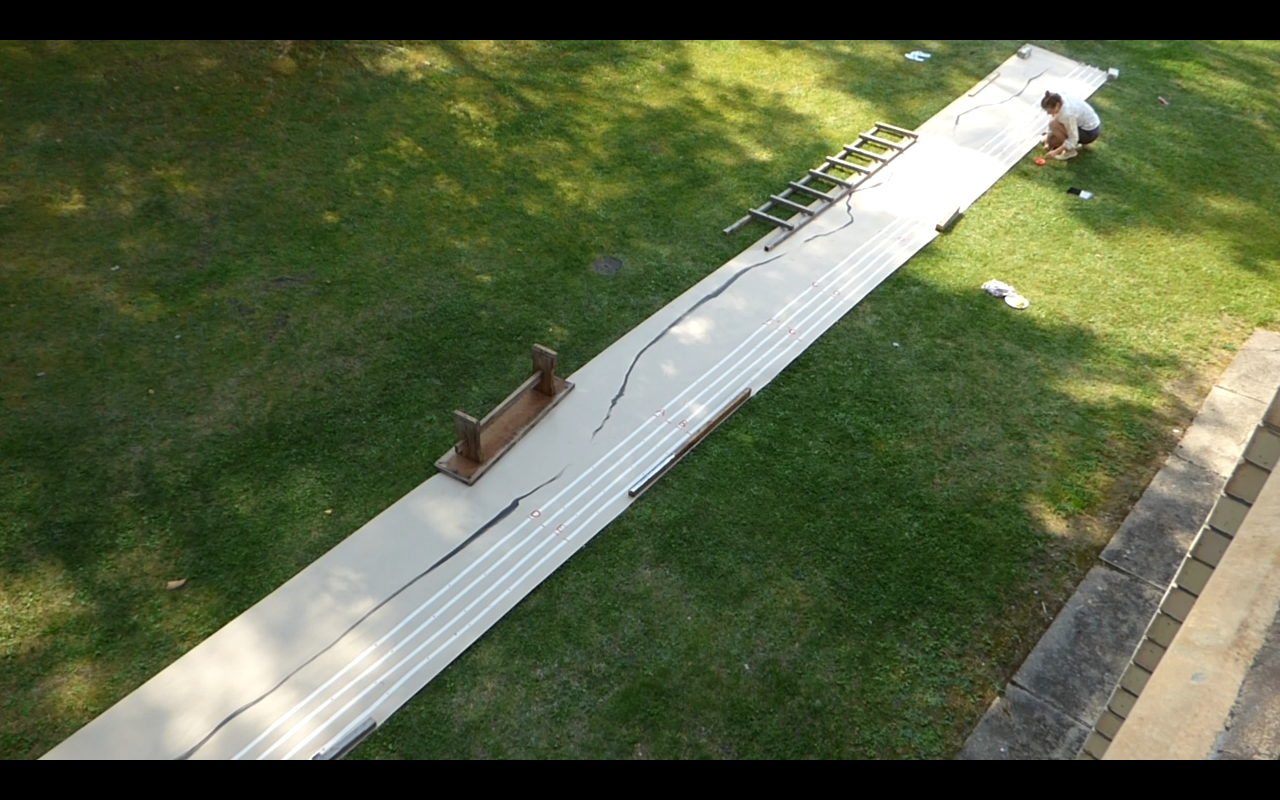 Then September was something else!

Last year I developed a large scale panoramic scoring technique and I’m so pleased turning this concept to ever more Christo-esque sizes this year with a commission for the unique space of Newhaven Fort.

I tend to get carried away with things and had to stop at 98 metres of panoramic score because I ran out of fabric.

Quoting my own Metro piece, I reimagined the caponier tunnel of the fort, buried deep in the Sussex cliffside, as a busy subway passage. The rustling and shuffling of commuters reading their free newspapers are setting the tempo for an ensemble of perambulating musicians playing from the panoramic score on the walls, as they wind their way through the tunnel.

It’s a bit of a challenge to explain this work in a few sentences. The full story is on my website. 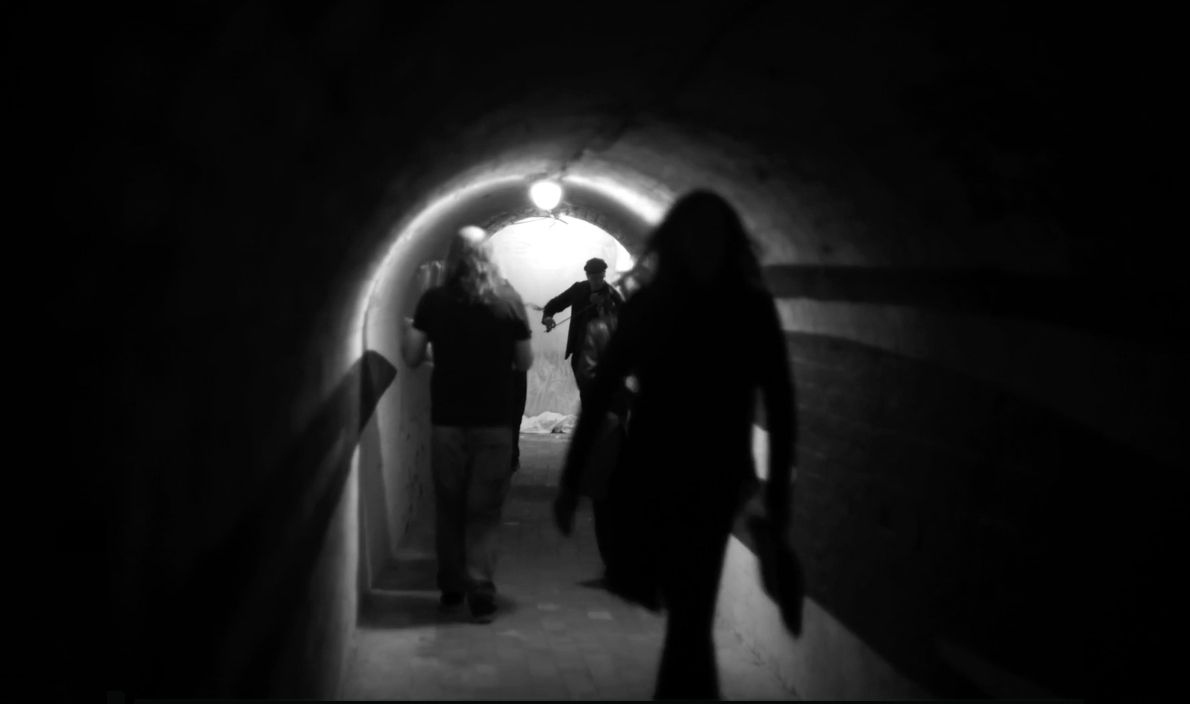 October found me unexpectedly looking back to the 2016 Icebreaker ensemble commission about to be performed for a BBC R3 Hear And Nowbroadcast.

‘Throwing A Window Through Another Window‘ features a lot of changes similar to panels in a graphic novel – but then without the pictures.

For the occasion I took time off from other projects to script out what’s actually happening in my mind – which was quite a revealing process! I put a lot of humour in the Icebreaker triptych, which now is typed out on virtual paper. 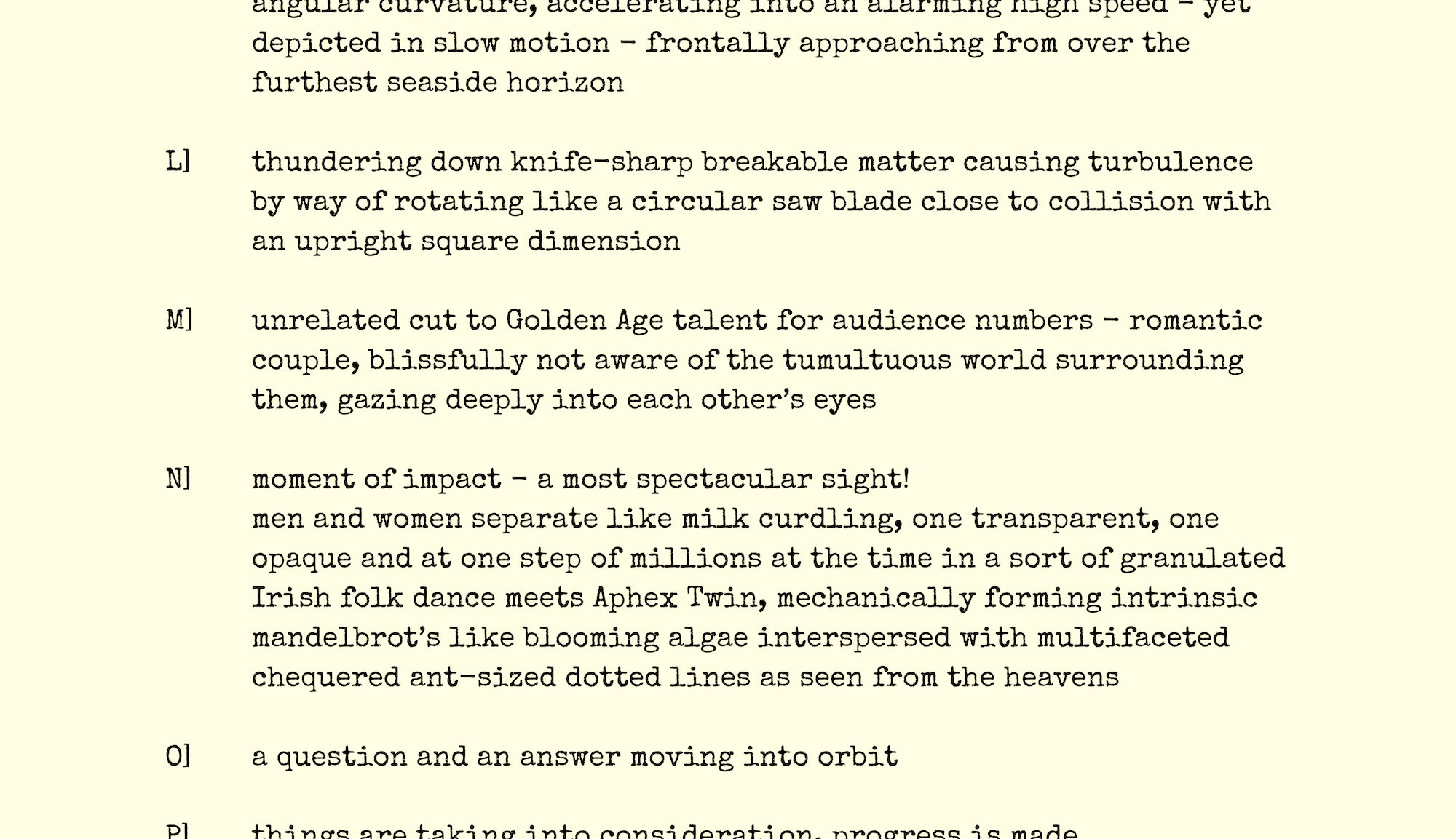 .
November brought the opportunity for a little Ferrero Rocher-sized indulgence into modular analog electronics, one of my earliest sonic loves, in the shape of a solo performance in a fabulously glamorous, yet slightly psychedelic, film noir setting, as part of the launch of a new music synching company based in Brighton. More in the next year.
December: I’m eating mince pies and planning 2019! 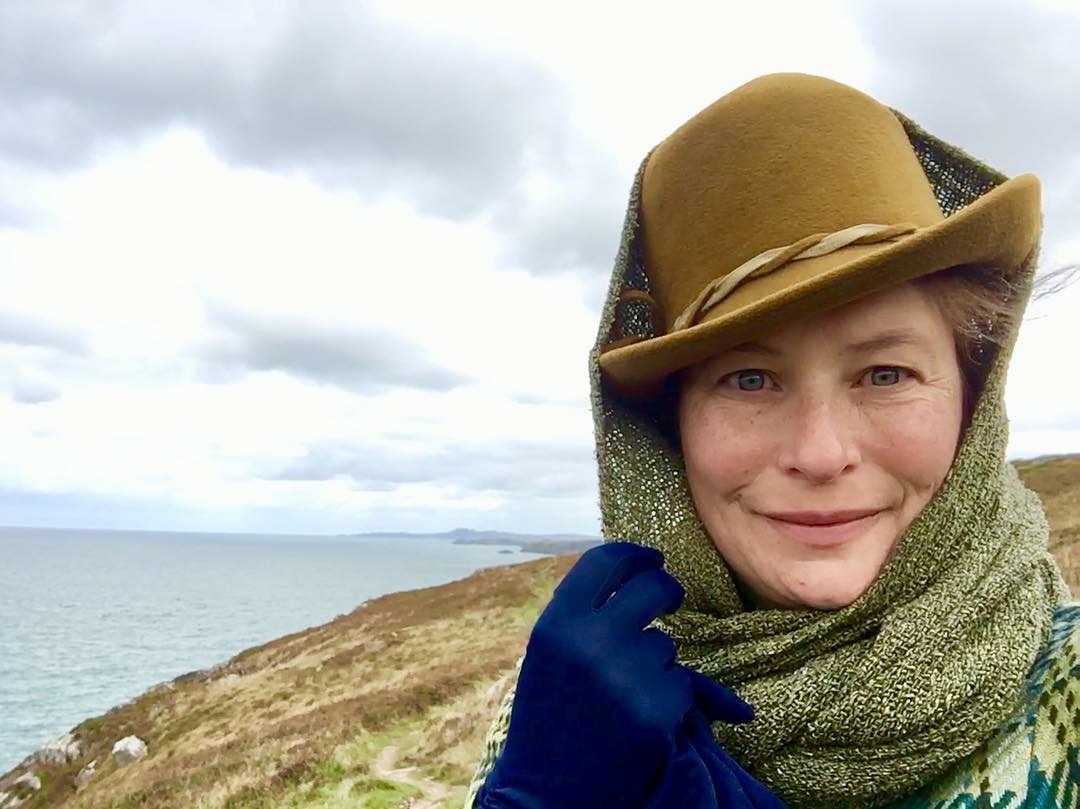 A warm thank you to all my collaborators and commissioners in 2018, to the wonderful audiences out there and to people believing in my work for making things happen. To all the kind individuals who got in touch with their personal stories of what my art has brought to them, it truly means a lot to me and I’m thankful to you all.

A special thanks and appreciation to the British PRSF for Music for awarding me with The Composer’s Fund, which has been supporting me in composing works for some exciting developments which are planned for 2019.

Would you like to stay updated? Please subscribe to Jobina Tinnemans’ Mailchimp newsletter via linked button below. Newsletters are sent out several times a year.