Panoramic scores, part of the interpretations of sheet music body of works, are liberating a score from its book format. The score wraps through a space and the performers have to walk to read their parts.

From a single movement, a single graphic line, harmonies unfold, like origami. Sounds carry through a space, fading in and out of earshot while a choreography unfolds. The performers read their parts in both positive and reverse directions, as one would read a landscape. Jobina Tinnemans developed a special scoring technique for panoramic scores.

Contemporary Music Ensemble Synaesthesis premiering ‘IMAGIRO Landmannalaugar’ in the Black Hall of The Printing House in Vilnius, Lithuania, August 2017. A commission by the British Sound And Music charity and the Lithuanian Composers’ Union.

For a press release please get in touch.

Rugged wild landscapes with their hills and mountains read like music to me. The Icelandic use the work ‘fjallasyn’ to describe a distant view, especially in clear weather and from a point where you can see a big part of a highland area – a panorama with many peaks.

The first one I made is notated in graphic panoramic score, but also as traditional sheet music. The development of this piece involved many stages and measures a length of 36 metres.

‘Largo’ is extremely conceptual, more akin to a landscape garden, planned and cultivated with mathematical precision. I’ve been calculating the concert space, tempo, repeats and how many steps of minimal 30cms and max 100cms size would be available, determining how long the work can be and in what structure. Yet, with all these minute calculations, IMAGIRO Largo still sounds emotional, melodic and not forced to fit a concept, which I try to keep as a dogma to my work. It would take an entire production team a week to set it up as a panoramic concert, which was beyond the scope of the commission, as such I notated it in conventional form, as well. The visual aspect and surround sound of the panoramic score is not present in the traditional notation.

photo shows one of the many stages to develop IMAGIRO Largo

Is the second panoramic score I made on a 24 metres long roll of paper which I painted in one session.

In contrast to ‘Largo’ I approached ‘Landmannalaugar’ like a roam through the wilderness. It’s called after the scenic Icelandic mountainous views, the fjallasyn (Icelandic), of the mountainous region of Landmannalaugar it was inspired by.

Two players start at their indicated markers inside the score playing a single line, reading to the outer edge. Then the duettists pick up two more performers. All musicians play the single line, but because they are paced in different tempos this seemingly solo gesture opens up to form harmonies. 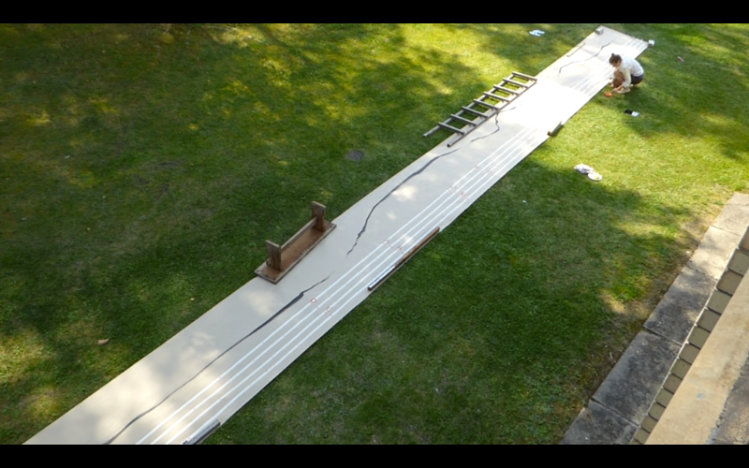 Painting the 24 metre long IMAGIRO Landmannalaugar on the grass outside, as no indoors space was large enough. It’s an extremely hot mosquito filled Lithuanian Summer’s day. Though, only an hour after finishing, the ink just about dry, a storm with massive pour down and lighting took over this very spot.

Next issue of Cambridge University Press’ Tempo Magazine will feature a profile article by Christopher Fox about my work and how I got to where I am. Artistically.

Additionally, David Kim-Boyle sheds a light on my panoramic scores from an audience perspective in his ‘Reframing The Listening Experience Through The Projected Score.’

For ensemble and panoramic score.

Monumental natural sceneries combined with their accompanying miniature sound textures, as generated by wildlife calls and flora, are my major source in composing music. With my latest works I’ve created a line of various abstract expressions rendering the sonic essence of these natural parameters into their most minimalist representation. By means of questioning what is sheet music, which resulted in using the paper score itself as part of my compositions.

IMAGIRO unfolds from a single landscape size movement into a sound sculpture like origami, whilst pacing the musicians through the concert space in a slow-motion ceremonial choreography.

This work exists in two notational versions: as regularly notated sheet music and a specially developed panoramic score. The particular graphic scoring technique of IMAGIRO required that the piece needed to be written to a very strict dogma, giving it a very specific sound.

Both sonically and visually the graphic score describes in kinetics my admiration for the immersive sensory experience of wild natural sceneries. It’s inspired by how Chinese ink and brush masters depict a majestic panorama on a scroll in only a mere few lines.

IMAGIRO is commissioned by the DAR Residency of the Lithuanian Composers Union in collaboration with British Sound And Music for the Lithuanian ensemble Synaesthesis and will premiere in the Black Hall of the Arts Printing House in Vilnius on August 14. 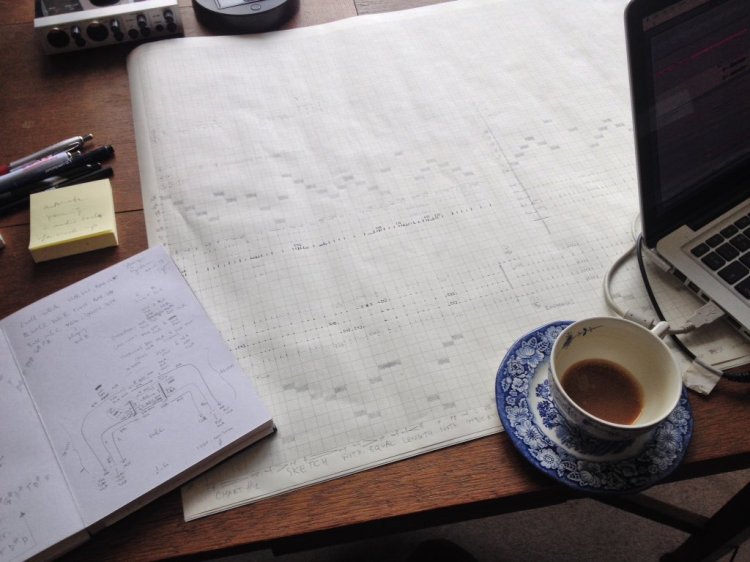 Hear hear! 7pm August 14 in the Black Hall of the Printing House in Vilnius.

There is a fantastic variety of New Music programmed for this evening with very exciting experimental pieces. Don’t miss if you’re around!

Trying out the panoramic score in Vilnius Library during rehearsal. #IMAGIRO

For those interested, let me talk you through the many various stages of creating this work. I guess because it’s just as much part of the composition as the music itself.

‘IMAGIRO’ is a composition for ensemble and panoramic score, unfolding its music from a single landscape size movement into a sound sculpture like origami, whilst pacing the musicians through the concert space in a slow-motion ceremonial choreography of imaginary Olympian sprinters.

At the bottom of photo below is the initial ink and brush sketch. An idea I have been playing with for a considerable amount of time with my own interpretation of Chinese traditional scrolls and after a snowy visit to Iceland. Experiencing the music in a landscape, a wide kinetic scenery of sound. This initial sketch features the concept of a panoramic score, having the musicians read their parts while walking along the score.

In the sketchbook on the right I calculated how many steps would fit in the dimensions of the concert space resulting in how many minutes of music. And how to engineer the order of the panoramic score in such way it would result in a standalone piece of music rather than a concept only.

Not shown in photo is the following stage where I had to forget about all these parameters and write music from a spiritual place in my mind – ‘feeling free’, right?! – within this extremely specified dogma. 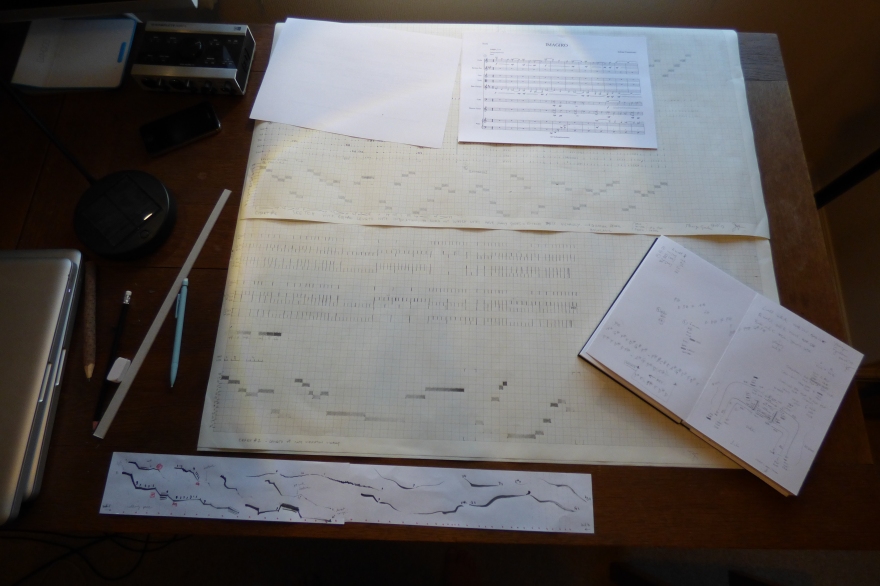 Which, in the top of the picture, I translated into a tangible ‘IMAGIRO’ sheet music version. This communicates the music, but not the sound kinetics, choreography and visual aspects of this piece.

On the large sheets of graph paper I’ve been charting out the graphic panoramic score step by step to get a grip on the technique of notating this work to how I envision it to be when finished.

Photo at the bottom shows how I’m getting closer to the final graphic panoramic score, by painting the sound pitches and textures on model scale.

I’m like a fish in water. Or a duck in a pond. Totally loving this entire process.

‘IMAGIRO’ has been commissioned for ensemble Synaesthesis by LKS in partnership with AiR Krems and Sound And Music. during the DAR residency in Druskininkai, Lithuania. The work will be premiered in Vilnius on August 14, 2017.

Full of beans finishing my new piece #IMAGIRO. A #panoramicscore! So excited and full of wonder how this is going work visually. Unfolding music and players through the concert space in a time-lapse rally. In theory it works really simple… #brainworkout #Vilnius #premiere14aug #ensembleSynaesthesis